From the song “We Three Kings” to the recently released movie “The Star,” you don’t have to look far this holiday season to hear the story of the Magi, or Wise Men, who made their way to worship Jesus shortly after his birth.  In the Bible, their story of following a star, talking to the jealous King Herod, and ultimately giving precious gifts to Jesus can be found in the second chapter of the book of Matthew.  Here in Huntsville, the wise men are seen making their way towards the manger, high above the Tinsel Trail in Big Spring Park. Did you know our very own wise men also have a story of how they came to find their way to their destination?

The larger than life pieces began as beautiful sketches of the nativity scene figures by Julie Broadway, who worked with additional volunteers to complete the project.  Ken Dunn took Julie’s sketches and turned them into large wooden cutouts, to which detail was added back in using chalk lines and then paint.  Julie’s team of helpers included Donna Leonard, Audra Hampton, and Russ and Nanette Boyanton. The long process was a labor of love, giving Julie quite a lot of time to think about these travelers and their journey. She recalls, “I painted them with personality on each face. I wondered what they would be thinking. Being excited to be going where they were…concern for what awaited them when they returned. The solemnness and awe of what they were about to see. So much had to be going through their minds. Ironically, King Herod had been completed before the wise men were even started and he looked across the room, glaring at us the whole time!”

The process wasn’t all quiet contemplation, though!  One day while painting, Julie hurried to answer a phone call. Two cans of paint spilled, and one wise man had to be repainted.  Like the original travelers who inspired the project, who must have surely overcome numerous obstacles and setbacks in their journey to worship the King, the work continued until the goal was reached.  The beautifully painted wise men made it to their new home at the top of the Tinsel Trail, standing as a reminder to us all of the gifts of Christmas.

You can visit the wise men and nativity throughout the Holiday season at Big Spring park. Share your photos by tagging #ChristmasinHuntsvile on social media. 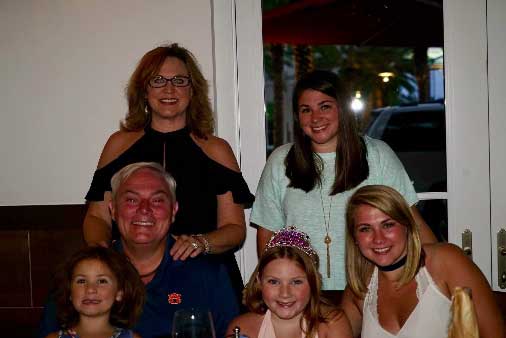 Thank you to the Broadway Family making the Nativity Scene a reality!