For the third year, First Baptist Church is sponsoring the Nativity Scene as part of the Huntsville Tinsel Trail.

As part of the scene, Abbi Helser painted a very special King Herod mural. The mural is large, spanning 18 feet wide and 8 feet tall. But it first had to start out with an approved design. Last summer, Abbi sent a few designs to Dr. Hicks and the brain trust committee. 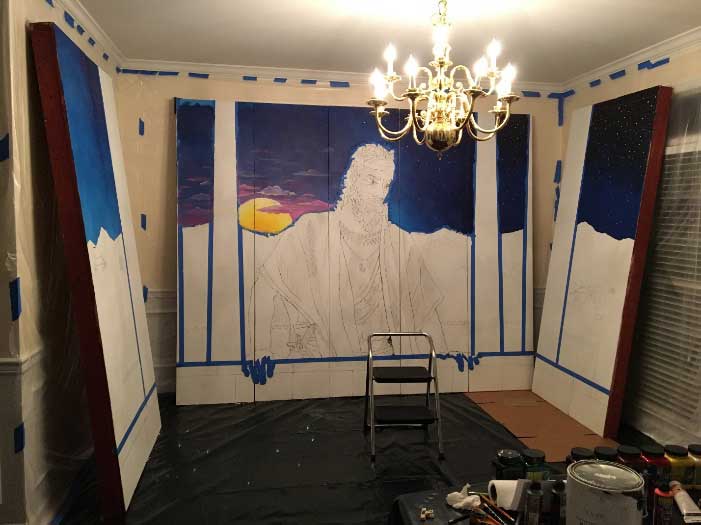 It took nine panels to assemble all the plywood pieces of the mural. The nine disassembled panels were delivered to Abbi’s home and she set them up in her family’s dining room. Abbi used very vibrant pigmented paints for the mural, which are also weatherproof and UV-proof. She started painting in June and had most of the design finished by end of July 2017. The sealing process took several weeks for each coat to be completely dry, Abbi said. See the beautiful mural for yourself at the Big Spring Park Tinsel Trail.

Abbi said she has always been an artist, but it wasn’t until about two years ago that she started to paint as opposed to drawing. The King Herod mural is her first large-scale work.

“I do intend to continue creating throughout college,” Abbi said.

Abbi plans on attending a liberal arts school, with Birmingham-Southern College as her top choice.

You can see the King Herod mural and the First Baptist nativity scene at Big Spring Park now through January 2nd.